Stay up to date with all of the latest news with SZapp!

Please come along and join us on Friday in the amphitheatre as we complete our Celebration of Learning week with a special Liturgy led by Years 3 & 4.

Happy Father’s Day to all of our Fathers, Grandfathers and Special men in our blessed lives.

We hope you all had a lovely day.

Bless all the fathers in the world.

Father, we ask that You guide them to be good role models and loving to their children. We also ask that You help them to be a father like You are. Give them grace and patience to handle students in a loving way. 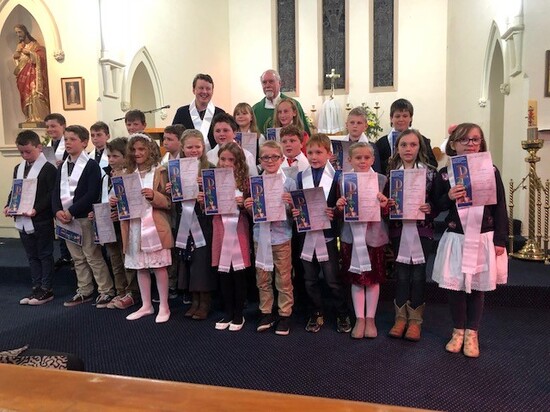 Dates to mark on your calendar: Until further notice, we will only be holding Liturgies at the school at 12.30pm

Use the image below to encounter the divine. 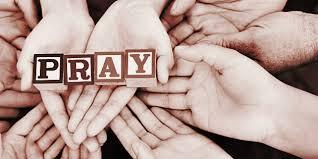 Community Council hopes all who attended the Movie Trivia night had a great time. A big THANK YOU must go to Peter and Carolyn Reardon, Sarah Graham, Kate Graham, Madeline Ryan and Michelle McDonnell for all their hard work in organising and hosting such a fantastic night. The night allowed all to test their movie knowledge, catch up with some friends and just generally have a good night out. It also raised just under $3,000 which will go towards school improvements that Community Council is working on. Congratulations go to the teachers' table who won the night.

Catering for the Trent Barrett Shield was also another successful fundraiser for the Community Council and a great day of sport for all the students’ involved. Thank you to Sarah Graham for her hard work in organising the canteen for the day. Thank you to Craig Hargraves, Tim Jones, James Graham and Jock Graham for volunteering their BBQ skills and to Simone Jones, Kate Graham, Melissa Smart, Gemma Crowe, Lisa Peterson Lisa Wilson and the School Captains for helping Sarah in the canteen. Jaki Fairall, Claire Somerville, El Turk, Jess Nugent supplied some very yummy cooking that was sold on the day too.

Do you know of anyone one who might be interested in helping out in the school canteen? This might be a grandparent or family friend etc who is available on a Friday for a couple of hours. All new canteen helpers are paired with an experienced helper to help show them the ropes. It would be great if we could find a few new people to help with the canteen so that we can ensure its future. If you or anyone you know is interested please contact the school office or Leanne McDonnell. For all those fabulous people who already help out in the canteen thank you for your efforts. Please continue to ensure all receipts are handed into the office at the end of the day along with the money.

Please ensure that if you have a sibling starting at St Pat's in 2019 that you drop in your completed application form along with originals of required documents for citation and copying.

Student of the Month Award

Student of the Month
Twice a Term St Pat's recognises a student from each year group for learning excellence. This award encompasses the student's consistent effort to achieve at their best, collaborative behaviour in and out of the classroom and displaying a growth mindset for learning. Last Friday the following students were congratulated on receiving this award. 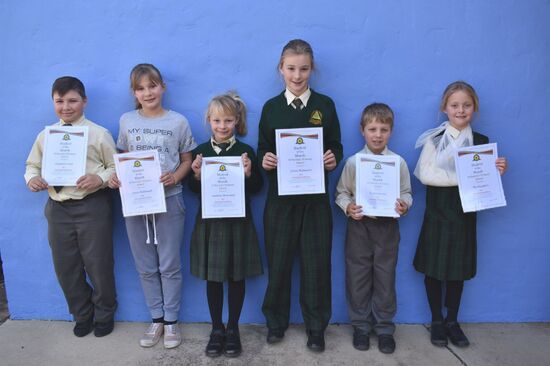 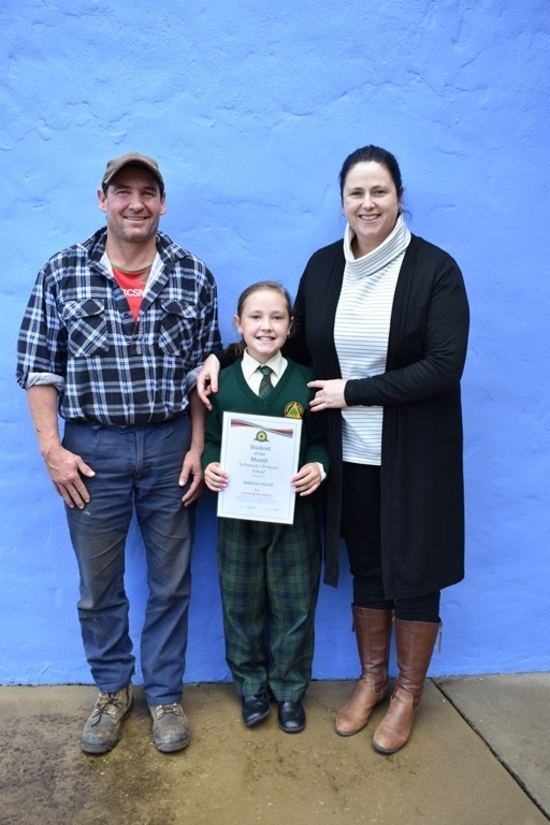 YEAR 1/2: Gracie Peterson - a hardworking attitude to her school work this term Keep it up!

YEAR 3/4: Rylee Flanagan - being a good friend to classmates.

YEAR 1/2: Jack Ryan - making a big effort to complete all given tasks.

YEAR 3/4: Jezanna Winchester - discovering and visualising all the nets for a cube.

Bec Gaskin would like to place the Summer Uniform Orders by Tuesday 11 September. Could you please ensure that you take the time this weekend to assess your child's uniform needs. To run an efficient Uniform Shop we need to be mindful that we make one order and therefore pay the one delivery fee. Your assistance in this matter would be greatly appreciated as we will only place the one order.

Please note that our facsimile services have now ceased. To communicate with the school please email or phone.

Happy birthday to the following people who celebrate their birthdays

Bonnie Wooderson will be celebrating her birthday this Sunday 9 September

Sadie Eccleston will be celebrating her birthday on Sunday 16 September

Sorry to scare everyone but it is only just over 100 sleeps until Christmas. Community Council would like to once again offer Crazy Camel for all those special Christmas gifts for friends and family. However, we will need a volunteer to help coordinate this.

What is Crazy Camel? Crazy Camel Fundraising turn your children’s artwork and photos into keepsakes families will love for example tea towels, cards, tote bags, calendars and more! A fundraising pack will be sent to the school which has all the required information. Artwork and parent orders get sent to Crazy Camel and come back as wonderful keepsakes/presents. Which makes this a very easy fundraiser to coordinate.

If nobody comes forward to volunteer to coordinate Crazy Camel this year it will not go ahead. It would be a shame for all those grandparents to miss out on next year’s calendars etc so if you have a little spare time please consider helping us out. Please contact Kim Paton (0427164167) if you would like any more information.

The Australian National Busking Championships™ is an Australia-wide network of busking festivals. The ANBC celebrates the rich diversity of Australian music and street performance culture. Throughout the year, Regional Finals are held in towns all over Australia culminating in the ANBC National Grand Final  which is held in Cooma NSW on the first weekend of November.

The buskers will perform along Sheridan Street Gundagai. Busking will start about 9am and continue to about 4pm.

The “Finals” concert will be held at Gundagai District Services Club from 5pm.

Thousands of dollars in cash prizes will be up for grabs at the ANBC Gundagai Regional Finals. Gundagai is one of the regional towns that have joined the ever-growing network of ANBC busking competitions around Australia.

There are generous prizes for 3 age categories, Open (Adult), Secondary (High School Age) and Primary (Primary School Age). Plus lots of other awards such as People’s Choice Award, Best Band, Country Music, Blues Music, Jazz Music, Classical Music, Folk, Indigenous, Community Based Music, Youth Encouragement, Most Innovative, and Ability Award (for buskers with a disability). Solos, Duos, Groups, Ensembles, Choirs are all welcome. There has even been a prize for non-musical Street Performance such as jugglers, magicians, and dancers.

The winners of each of the 3 age categories will qualify for the ANBC National Grand Final in Cooma.

Australian National Busking Championships™ is a Registered Trade Mark (TM# 1658214). It can only be used with permission of the IP Owner, Allan Spencer, Cooma NSW