Stay up to date with all of the latest news with SZapp!

Welcome to Week 6! Last week saw the start of our Lenten season, with the Blessing of the Palms on Shrove Tuesday followed by a beautiful Ash Wednesday Mass the next day. Lent is a time of fast, abstinence, reflection, prayer and a time to think more about others. It was lovely to see our SRC thinking about the impact of the bushfires over the holiday period and organising a special day last Friday to donate money to support those impacted.

All staff attended a First Aid and CPR course last Monday and Tuesday evening. It is a mandatory requirement for all staff to be upskilled each year in CPR procedures and every three years in First Aid. Our thanks to Gary Wilson for conducting the course and keeping it interesting and enjoyable.

In keeping with our focus this year, staff have begun Professional Learning this year in the area of STEM (Science, Technology, Engineering and Mathematics). Lora Bance from CE worked with staff last week, looking through the Science and Technology syllabus and linking outcomes, content and stage statements. Lora will continue to work with staff across the year and build professional competence as we incorporate STEM skills into our Science and Technology curriculum.

Please keep in mind the wonderful St Patrick’s Variety night coming up on Saturday 14th March. A great night out is guaranteed!

The Parish also have their auction coming up THIS Saturday at 10am. Lots of beautiful furniture and other household items for sale. Come and grab a bargain!

I will be attending the annual Leader’s Retreat in Bowral this week. All Principal’s along with CE staff will meet to discuss future directions in education as a Catholic system while also spending time in prayer and reflection.

Best wishes for a wonderful week ahead.

Last week we began our Lenten journey with a beautiful Mass presented by Year 3/4 and Mrs Flanagan. The children read so beautifully and reverently undertook their roles in the Mass.

As we continue on our journey we reflect on Lent being a time to turn back to God, pray more, to love others and to be our best self.

The Relics of St Therese of Lisieux

The relics of St Therese and her parents St Louis and St Marie-Azelie (Zelie) will travel through a number of dioceses in Australia this year. The saints who are ‘visiting’ Australia are the only married couple to have been canonized, and their daughter who is one of the most popular saints of the Catholic faith. Being a family, the Martins prove that the family is the seed ground of holiness and goodness.

Our parish of St Patrick’s is fortunately one of the parishes in the Canberra Goulburn Archdiocese chosen to host the relics.

On Tuesday 31st March, the relics of St Therese and her parents will arrive in Gundagai at 12 noon and remain for several hours before continuing on their journey. A special Mass will be held and veneration of the relics will continue after Mass.

A relic is a piece of the body of a Saint, an item owned or used by the Saint, or an object which has been touched to the tomb of a Saint.

Relics are remains that connect us with the goodness and holiness of the Saint.

Who was St Therese?

“Little things done out of love are those that delight the heart of Christ.”

St Thérèse of Lisieux is one of the patron saints of mission. St Thérèse loved the work of mission and wanted to travel to spread the Gospel all over the world and show how Jesus loves all people. One of the famous things she said was ‘I would like to preach the Gospel on all the five continents...’

Though St Thérèse never actually went on mission, she is a patron saint of mission because what makes a missionary is not the legs but the heart! A missionary is a person whose heart burns with love for Christ.

Thérèse was born in France on January 2nd, 1873. Her mum was Marie-Azélie Guérin and her dad was Louis Martin. He worked as a jeweller and watchmaker. Thérèse Martin was the last of nine children born to Louis and Zelie Martin. However, only five of these children lived to reach adulthood.

Thérèse lived a very simple and holy life. At age 15, she entered the Carmelite convent in Lisieux to give her whole life to God. She took the religious name Sister Thérèse of the Child Jesus and the Holy Face. Thérèse had four sisters and they all became nuns as well, dedicating their lives to God.

St Thérèse said: “I will seek out a means of getting to heaven by a little way—very short and very straight, a little way that is wholly new.” In fact, she asked special permission from the Pope to become a nun so young!

Louis and Zelie Martin were very proud of their daughters and showed them great love, but sadly Zelie, her mother, died when Thérèse was only four years old. Their mother never had the chance to see her daughters become nuns dedicating their lives to God.

St Thérèse lived a simple life of prayer and was gifted with a great closeness to God. Through sickness and dark nights of doubt and fear, she remained faithful to God, rooted in His merciful love. After a long struggle with tuberculosis, she died on September 30, 1897, at the age of 24. Her last words were the story of her life: "My God, I love you!"

Thérèse was made a saint on May 17th, 1925 by Pope Pius XI, only 28 years after her death. All four of her sisters were still alive when their little sister Thérèse was declared a saint. St Thérèse of Lisieux is the patron saint of aviators, florists, illnesses and mission. She is also considered by Catholics to be the patron saint of Russia. Her feast day is October 1st.

St Thérèse of Lisieux is one of the most popular saints in the history of the Catholic Church. St Thérèse saw herself as a child of God. She liked to keep things simple and focused as a child does. Trust, especially trust in God, is a childlike virtue. Thérèse’s love for God was very simple and she called it her ‘little way.’ She teaches us that God is everywhere—in every situation and person—and in the ordinary, simple details of life. It is because of this that so many people have followed her example and grown to love her because she shows us that we can love God in simple acts of kindness and love for others.

This Saturday morning at 10am the Parish will be holding a clearing sale in the St Patrick's Hall to auction off old furniture and other household items.   The auction will commence at 10am and items can be viewed prior to auction.

We are down to our final few weeks to sell our Monster Raffle tickets which will be drawn at our "St Patrick's Variety Night" on Saturday 14th of March.  Please return your sold and unsold tickets with money to the office by no later than Friday 13th of March 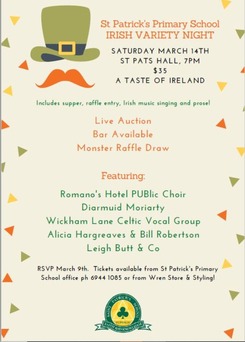 Our sporting calendar is set for the year and we are looking for parents who are interested in coaching or assisting with the following sporting teams entered in local gala/competition days.

Please contact Mrs Wilson if you can help out in any way.

Welcome to Autumn !  As the weather is starting to change, now is a good time to go through your "Winter Wardrobe" to check your child/children's supply of winter uniforms.

Bec Gaskin would like any orders for new uniforms in no later than Week 8 that being by the end of the week 20th March 2020 Please call into the office to collect an order form or download one from our website.  Orders can be dropped into the office or emailed through.

On Friday the 28th of February the SRC held a bushfire appeal, raising money for some places and towns that were affected by the recent bushfires in our Riverina. Everyone dressed in blue and green, the colours of renewal and new life. Because all of the students here gave up a gold coin each, we managed to raise $105 all up. This amount of money will be split, and go to different charities helping towns recently affected. We thank everybody for raising all of this money and remembering to dress in blue and green.

Friday afternoon all classes were involved in our annual "Clean up Australia Day" Our infants cleaned up around the school grounds and outside the gate while the bigger children walked around the block collecting rubbish.   Well Done St Patrick's students 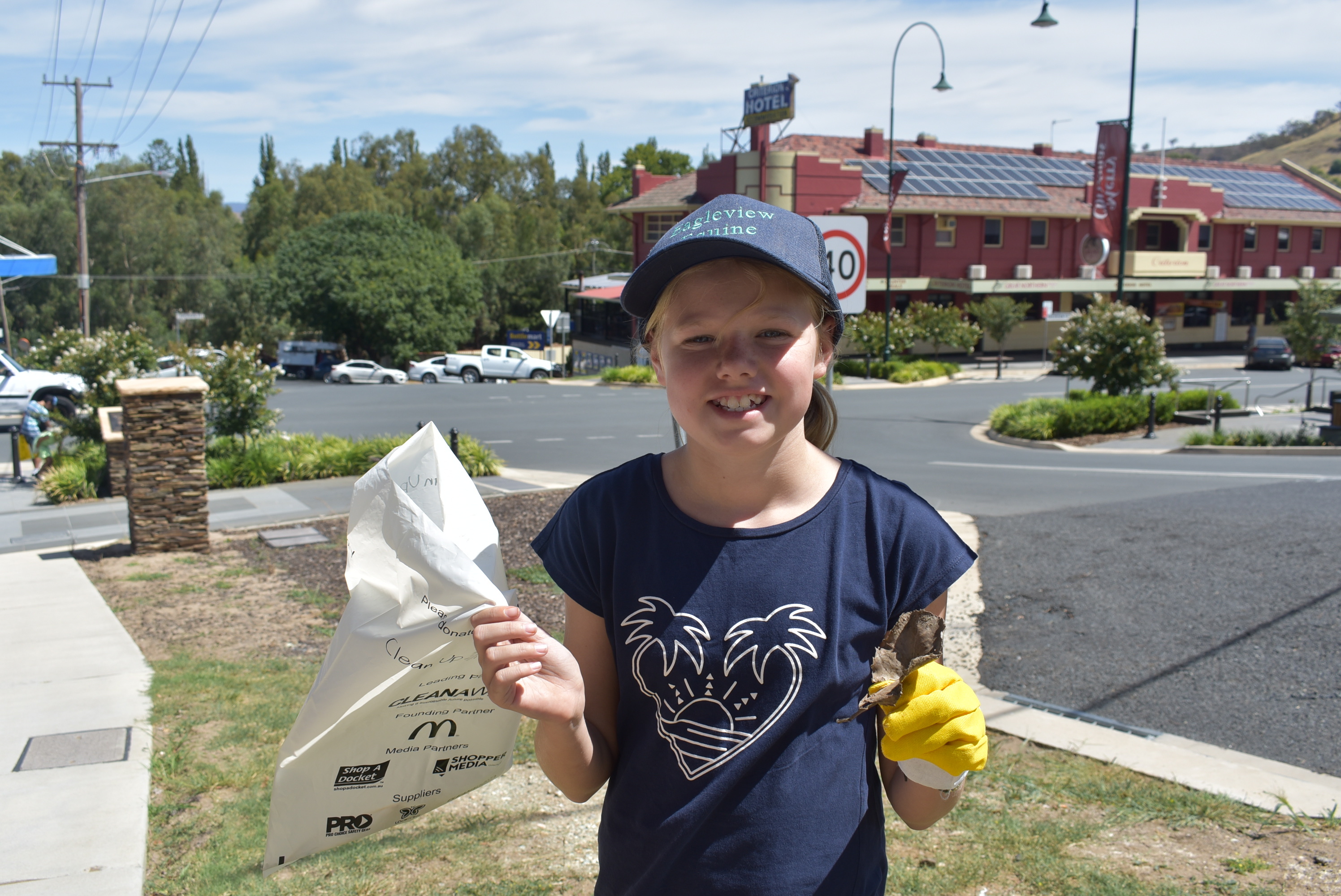 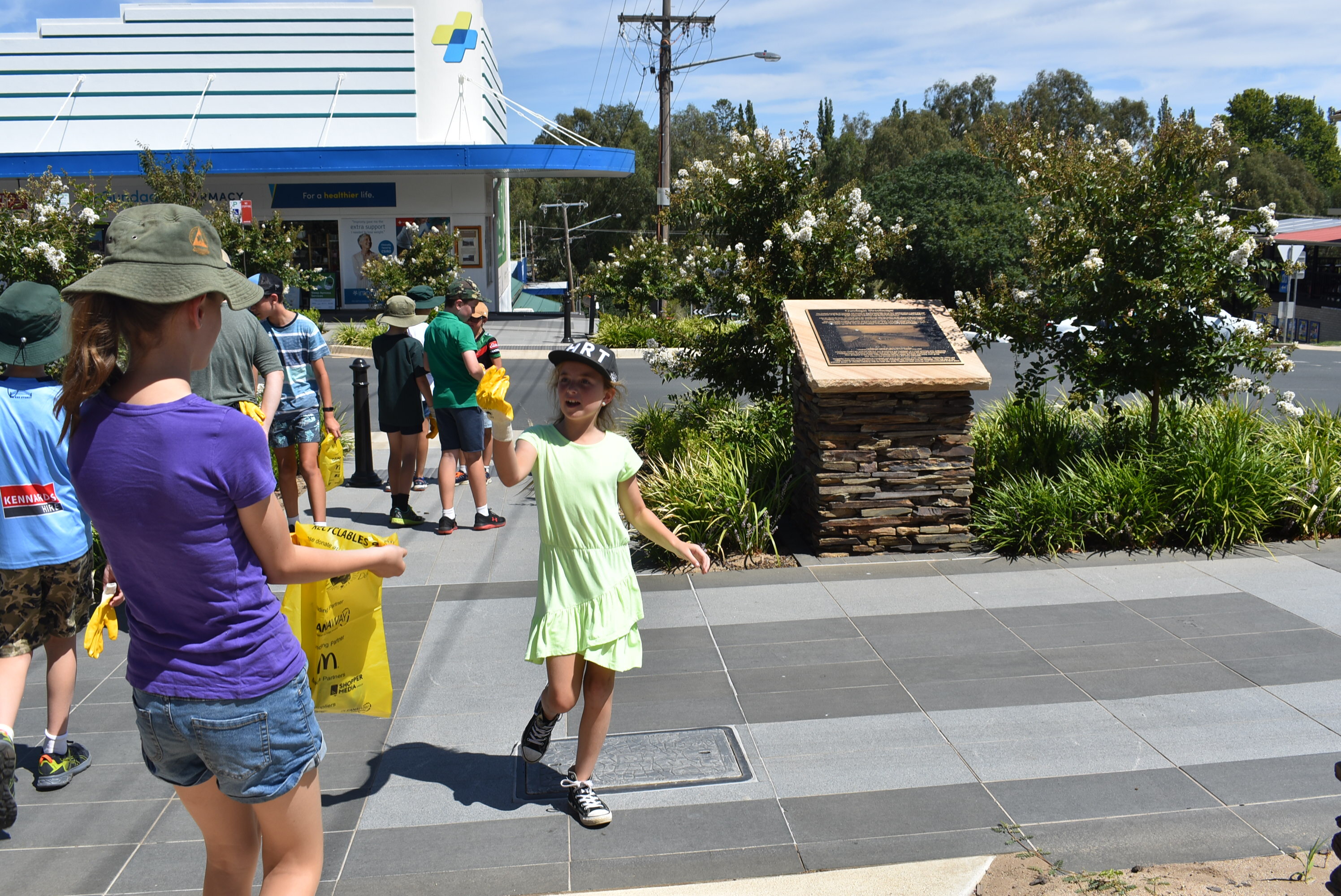 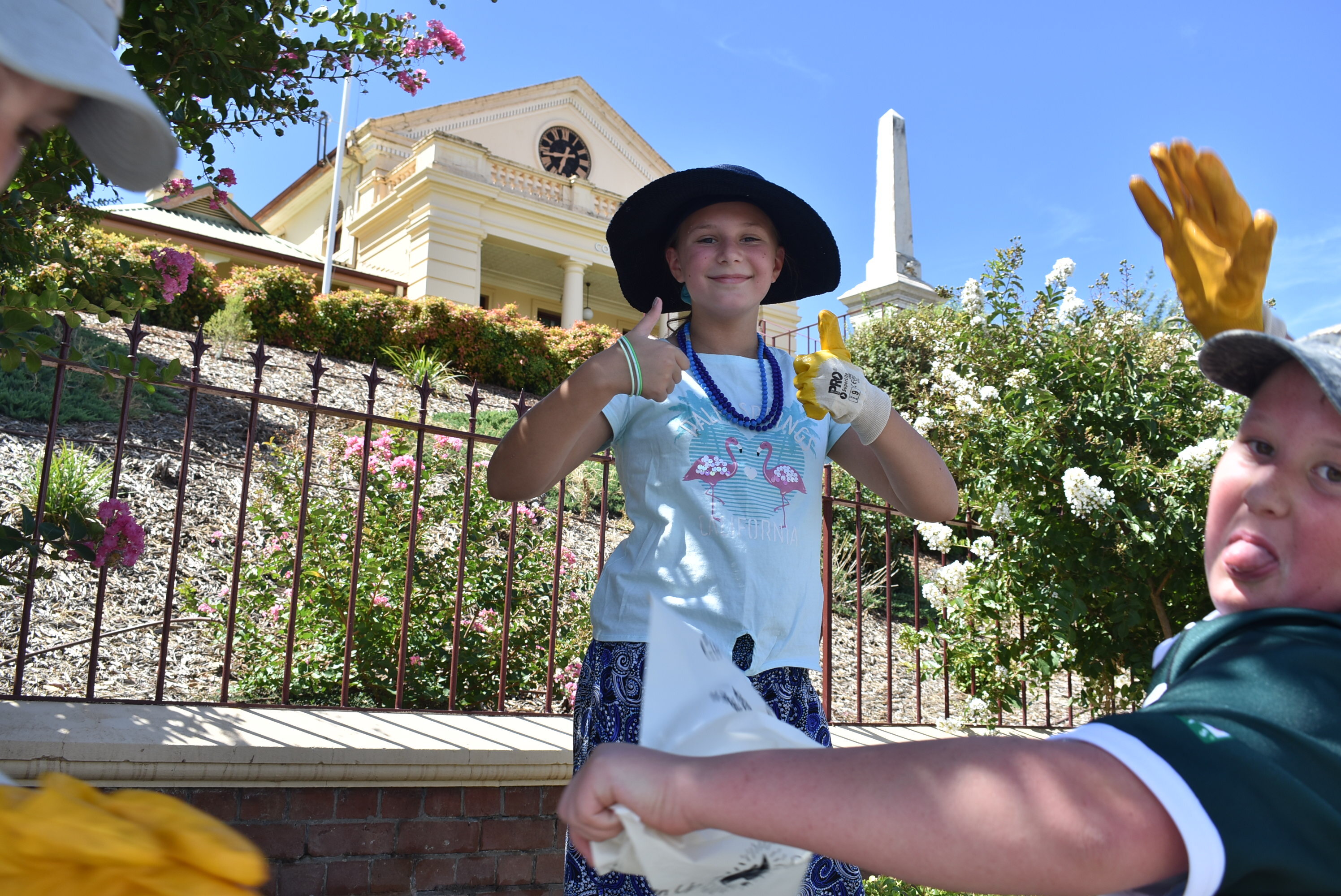 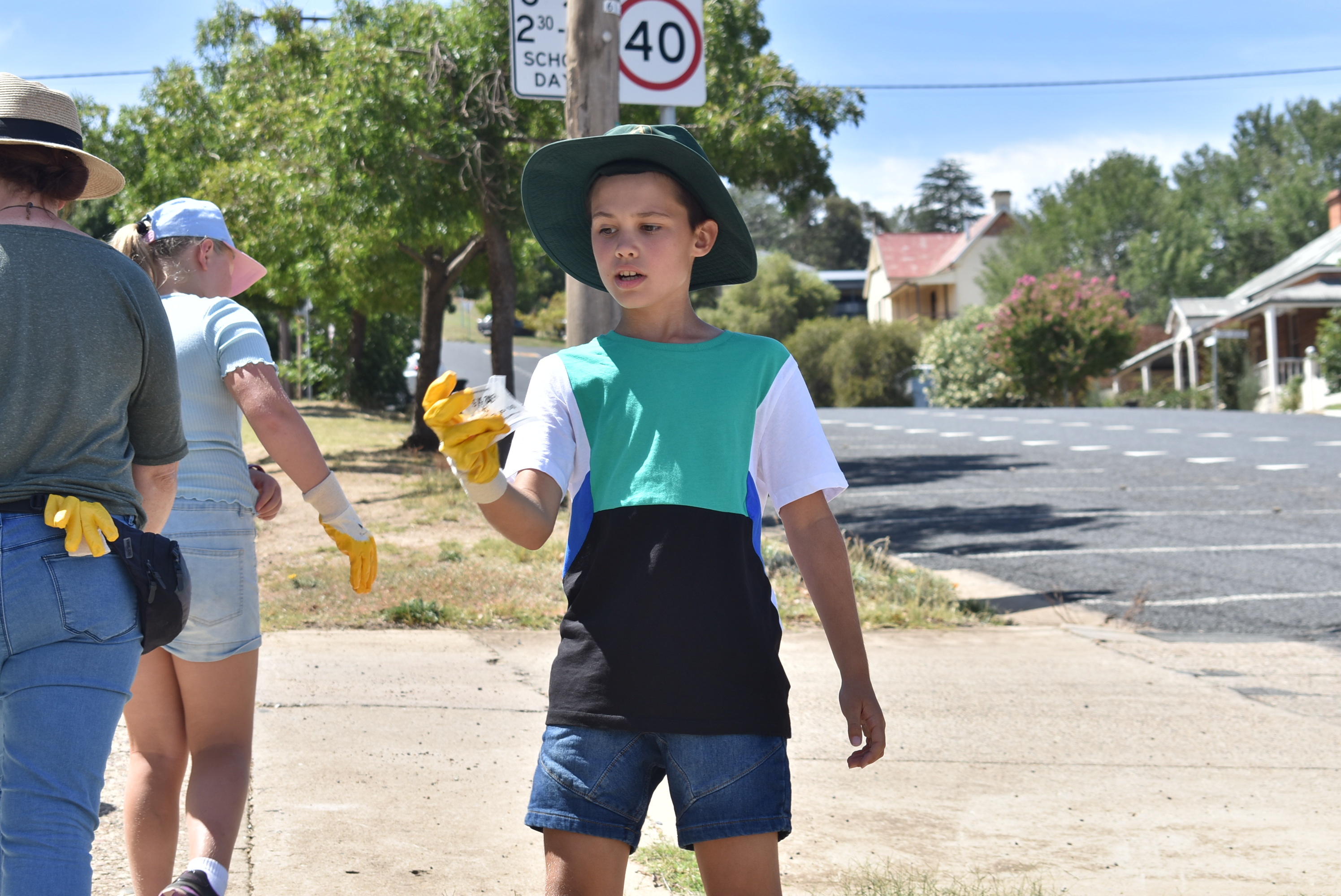 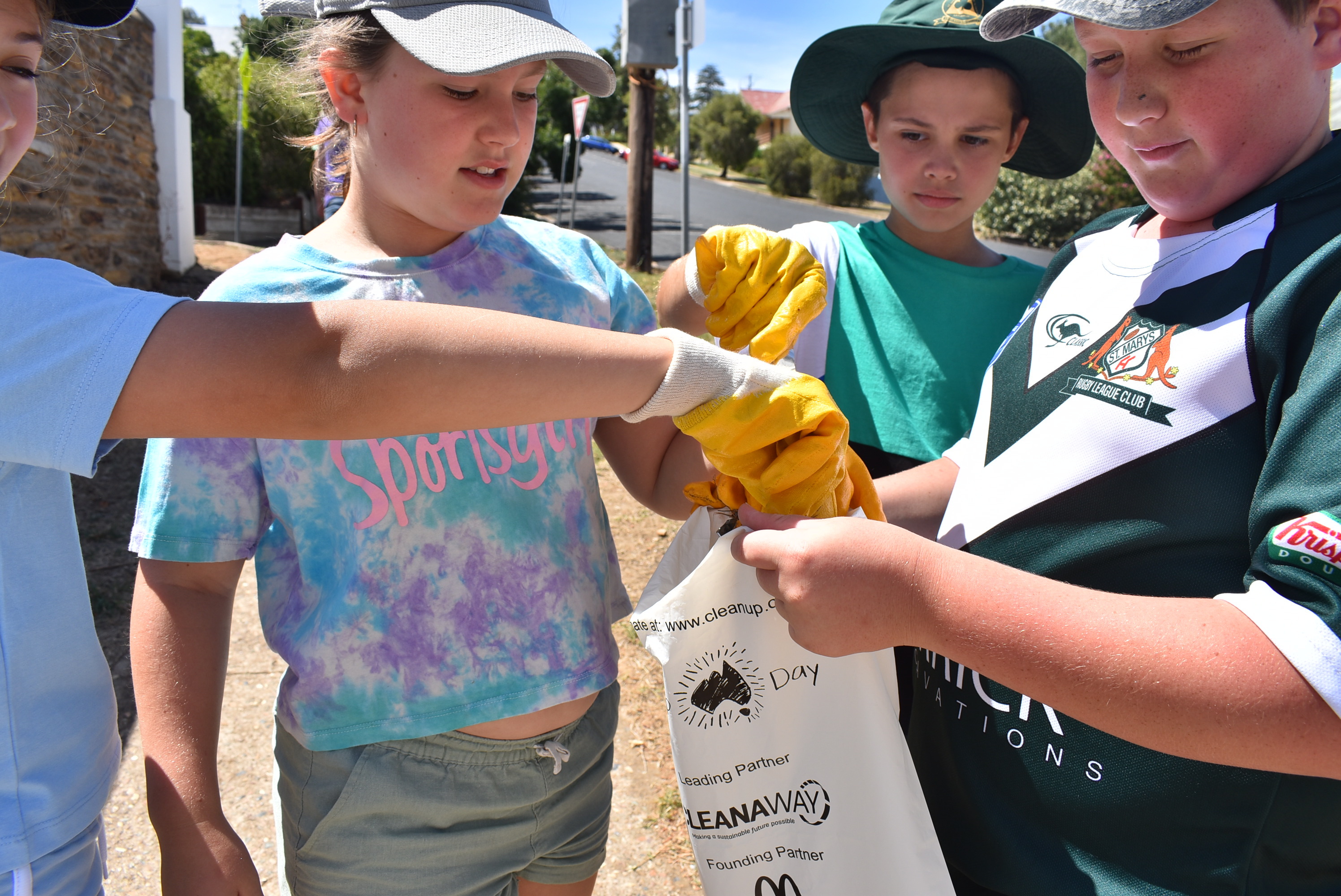 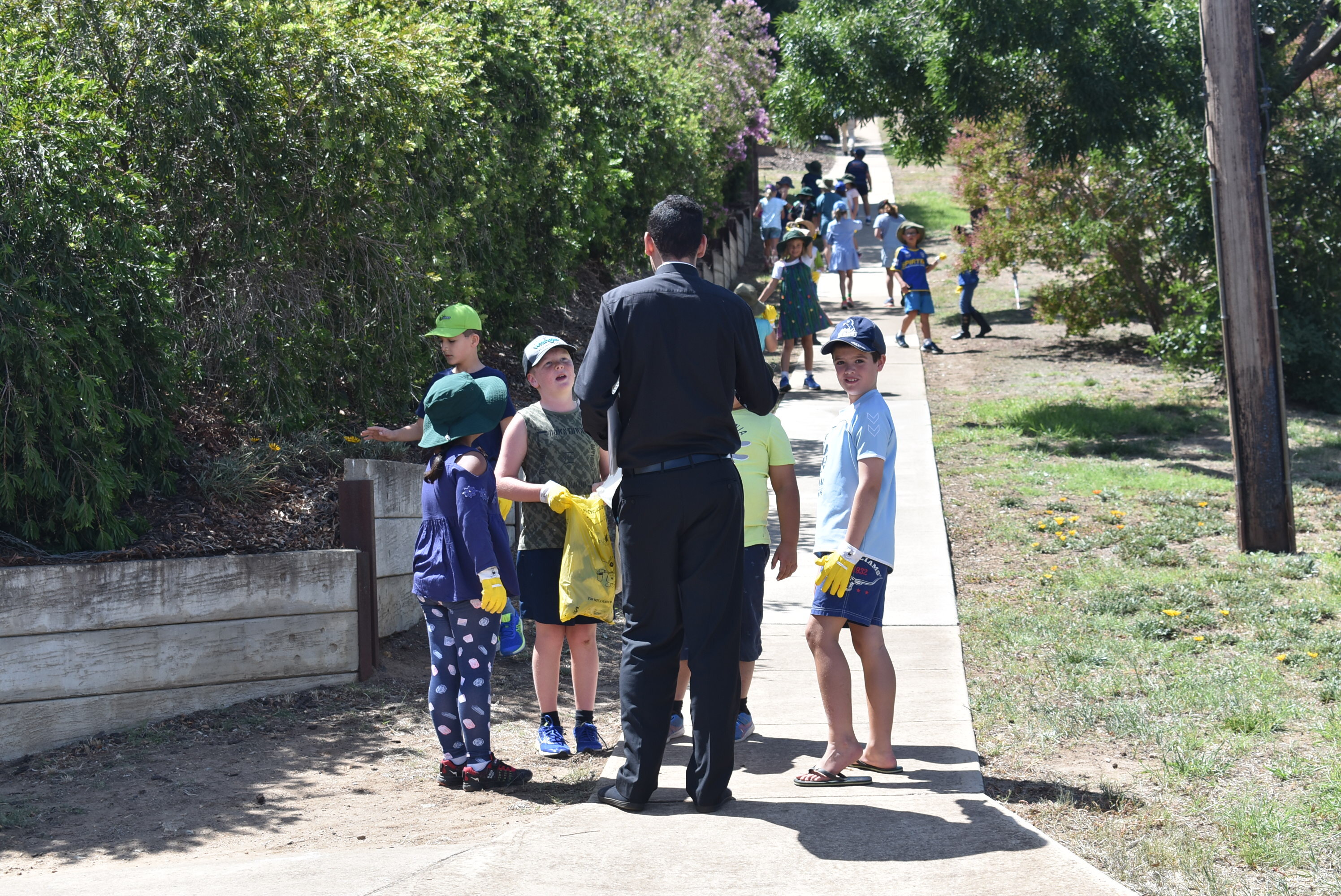 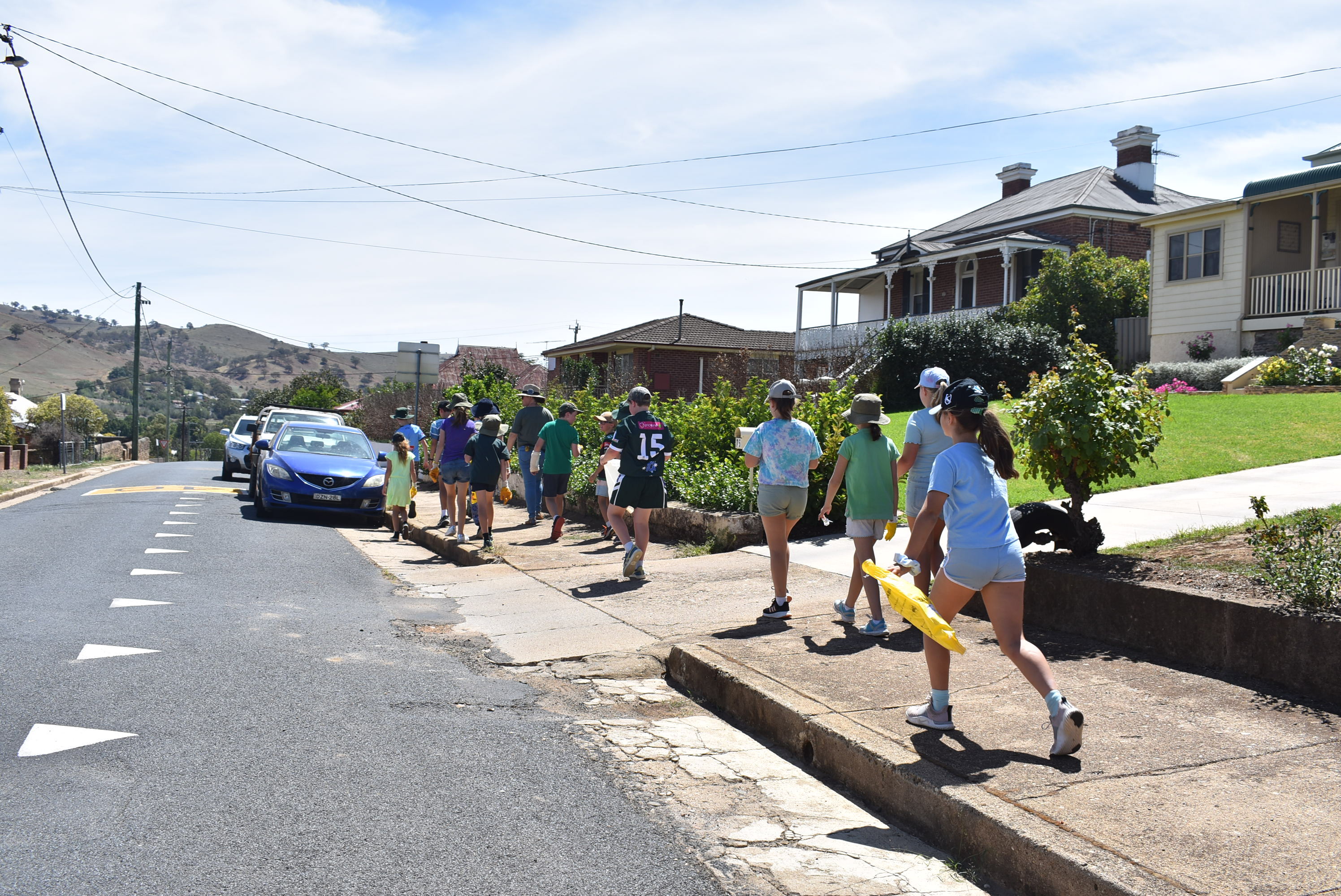 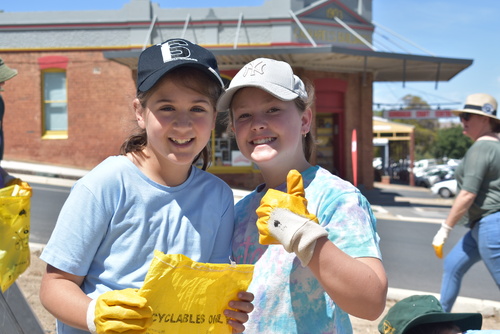 Congratulations to all our weekly award recipients.

Year 2 - Corby Rose for reading with fluency and expression

Happy Birthday to the following students who have recently celebrated a birthday.  We hope you all had a wonderful day

If you are unable to attend Mass on rostered dates please arrange a suitable swap.

Year 6 Read out St Patrick's weekly news every Wednesday at 2.15pm on "Sounds of the Mountains"